May 7, 2017Java 9No CommentsJava Developer Zone 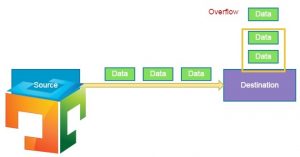 In the image above, we can see that if Destination can not deal with incoming data from Source, all future data could be blocked until the existing ones are processed.

Reactive Streams processes an asynchronous stream data across an asynchronous boundary (passing elements on to another thread or thread-pool), and receiving side (Destination) is not forced to buffer arbitrary amounts of data, then buffer overflow will not occur.

The main problem is Handling streams of data—especially “live” data whose volume is not predetermined—requires special care in an asynchronous system. The most prominent issue is that resource consumption needs to be controlled such that a fast data source does not overwhelm the stream destination.

Java 9 comes with one handy feature called Flow API or reactive API. It has four basic components as below.

Each Subscribes receives the same items in the same order,unless drops or errors are encountered.

Publishers ensure that subscriber method invocations for each subscription are strictly ordered.

Subscriber is a receiver of messages.

Data items are not pushed to the Subscriber unless requested, but multiple items may be requested. Subscriber method invocations for a given Subscription are strictly ordered.

Message control linking a Flow.Publisher and Flow.Subscriber. Subscribers receive items only when requested, and may cancel at any time.

A component that acts as both a Subscriber and Publisher.

The processor sits between the Publisher and Subscriber, and transforms one stream to another. There could be one or more processor chained together, and the result of the final processor in the chain, is processed by the Subscriber.

We can create one or more Processors in chain which link a Publisher to a Subscriber.

Now look at the diagram below: 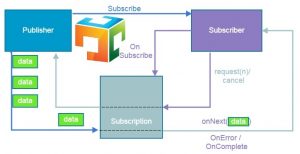